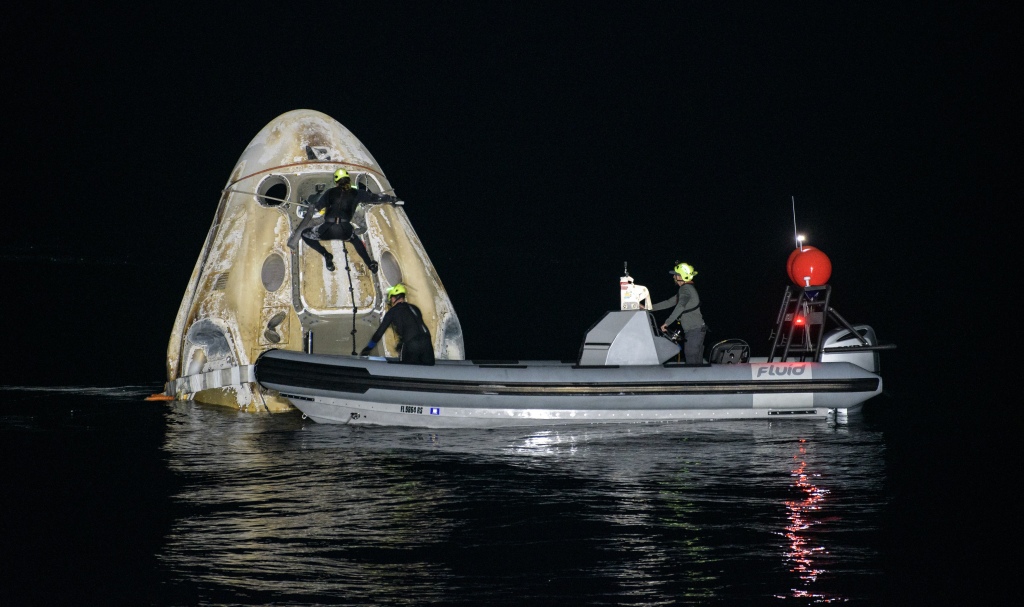 After almost six months aboard the ISS (International Space Station) the four members of Crew-1 have splashed down in the Gulf of Mexico ending their mission in space. Launching on November 15th, 2020, Crew-1 was the first operational crewed flight of the SpaceX Dragon spacecraft though technically the second flight of one being that two astronauts demonstrated the Dragon’s capabilities earlier in the year with a flight to the ISS as well.

Originally designated USCV-1 (United States Crew Vehicle Mission 1) was initially announced back in November of 2012 with the date set for launch in 2016. Only a year later NASA announced the launch would be coming after a year delay and to expect 2017 more likely. As we know it was further delayed into 2019 and then 2020 pending the success of the uncrewed and then crewed demonstration missions. Covid-19 also played a hand later in 2020 delaying the launch to November. In September of last year mission commander Mike Hopkins revealed the crew had named their spacecraft “Resilience”. Their mission, to launch aboard the Falcon 9 rocket from Kennedy Space Center in Florida, dock at the International Space Station and work with the members of Expedition 64/65 and further engage in scientific research aboard the station. During their mission spacecraft “Resilience” also broke the record for longest spaceflight by a U.S. crewed vehicle on February 7th of 2021 as it surpassed the 84 day mark of an Apollo capsule held on the final flight to Skylab back in 1974.

In early April of this year the Crew-1 astronauts moved their spacecraft from the Harmony forward dock to Harmony Zenith dock by using the Draco thrusters mounted of the side of Resilience’s trunk, in order to make space for the arrival and docking of the SpaceX Crew-2 spacecraft which since launched on April 23rd of this year. Since the Arrival of the members of Crew-2 there has been eleven humans stationed on board the ISS, and the space station which is about the equivalent to a five bedroom house must have been feeling awfully crowded.

Due to rough sea conditions the crew was unable to undock from the space station on their intended date of April 28th, and NASA was forced to make the decision of having the capsule splash down in the cover of darkness. Even though the Space Shuttle would regularly land during the night, this will be the first U.S. capsule splash down since Apollo 8 back in 1968 when Apollo astronauts Frank Borman, Jim Lovell, and Bill Enders returned from the first Human mission to circumnavigate the Moon. Undocking from the space station at 8:35 PM Est on Saturday May 1st, the crew would not reach the Gulf of Mexico until 2:57 AM Est. Once the capsule was safely secured onboard the recovery vessel “GO Navigator” the astronauts were given a quick medical examination and then flown by helicopter back to the Johnson Space Center. Their spacecraft however will have to take the long way back to the Kennedy Space Center, and travel through the Gulf, all the way around the tip of Florida and up the Atlantic coast where it will enter Port Canaveral and dock inside the safety of the Space Force Station there and have the capsule unloaded and refurbished for it’s next flight. This trip will take around a week to complete, but technicians onboard the recover vessel will start refurbishment immediately to do what they can until the spacecraft is safe back at Kennedy.