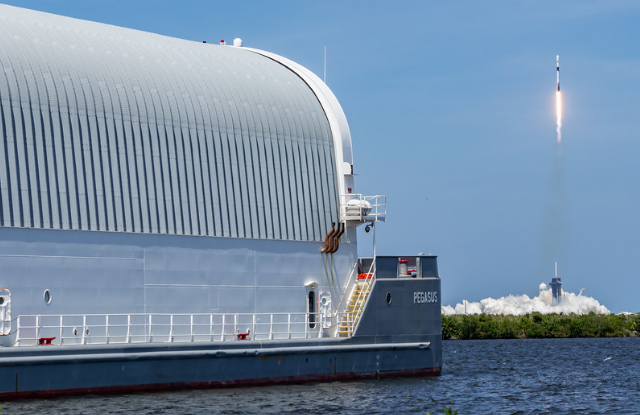 (Kennedy Space Center, FL) Today SpaceX launched another stack of 60 Starlink satellites into space. The rocket took to Florida’s bright blue sky at 3:01 PM EDT. The Falcon 9 was launched from Launch Complex 39A at NASA’s Kennedy Space Center. “May the 4th be with us,” said one of the flight directors as the Falcon 9 rocket leaped off the launchpad.

This launch marked the 82nd time SpaceX has landed its 1st stage and successfully recovered it. The 1st stage landed on the droneship Of Course I Still Love You positioned off the coast of South Carolina. The launch was picture-perfect. Falcon 9 passed through maximum aerodynamic pressure (Max-Q)  at T+1:15. Main engine cutoff was confirmed at +2:40 followed by stage separation and second stage ignition.

The payload onboard the Falcon 9 was a batch of 60 Starlink satellites. The low latency broadband satellites have been created by SpaceX to provide better internet connectivity in some remote locations. For more information on Starlink, visit Starlinks website Starlink Website.

Prior to the launch, there was an 80% chance of launch without violating weather conditions. The booster recovery weather was moderate. If you missed the launch you can watch a replay at Replay Of Starlink-25.