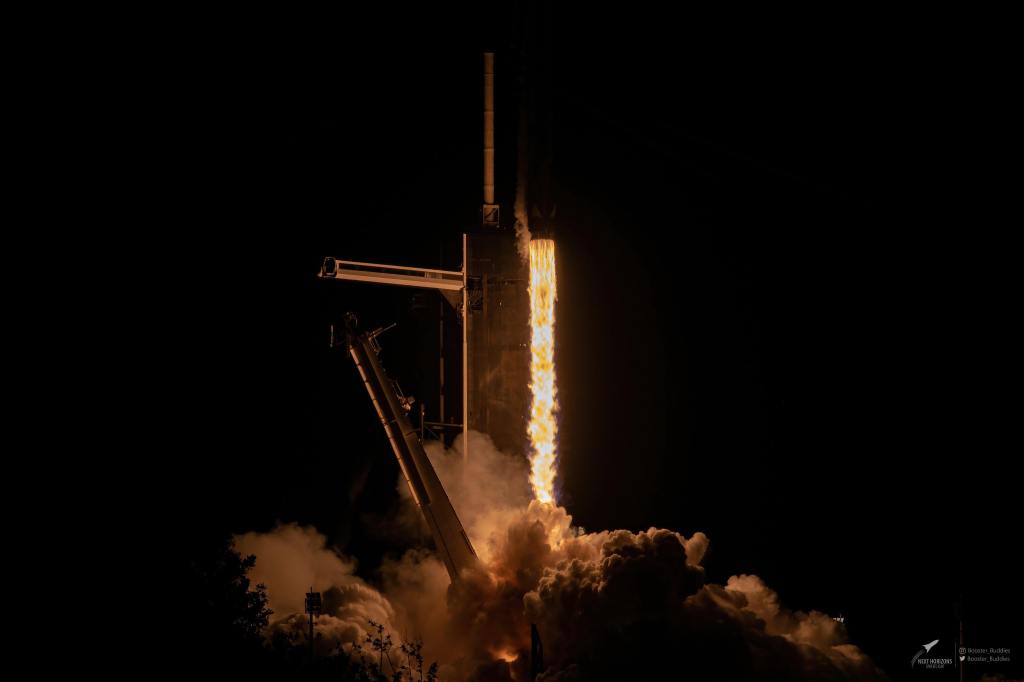 In the crisp Florida air about an hour before sunrise four people, two Americans, one Frenchman, and One Japanese set off to the International Space Station from historic launch complex 39A. Their ride, the Falcon 9 rocket with Crew Dragon capsule “Endeavor” has been standing tall on the pad for about a week now. many rehearsals have been done with the astronauts during that time to prepare them for the exact procedures they used this morning, only difference being that today those Merlin 1D engines ignited beneath them and slowly accelerated them until they were travelling faster than the speed of sound and out of Earths atmosphere. All four astronauts have felt the sensation of leaving Earth before, all flying at least once previously to space, and like them their ride has also been to space before. Both rocket and capsule have flown previously, making this the first reuse of a flight proven booster along with the first reuse of a privately developed spacecraft certified for human flight.

The eleventh Falcon 9 launch of the year, Crew-2 or USCV-2 (United States Crewed Vehicle 2) will replace the crew of Crew-1 which launched one hundred and fifty-eight days earlier, and join the cosmonauts of MS-18 aboard the space station. It will take just around twenty-four hours for the Dragon Capsule to reach the ISS (International Space Station) with the docking procedure scheduled to begin at 5:10 AM Edt. on Saturday April 24th, with the traditional welcoming ceremony to start at 7:45 Am Edt of that same day.

One of the important operations to take place during this mission is to upgrade the stations solar power system by installing the ISS Roll out Solar Array. This mission will replace six panels alright flying with the new design of compact panels that roll out, think yoga mat. Another research investigation flying with Crew-2 is a study for possible causes for suppressed immune responses in microgravity. If microgravity causes changes to the human immune system this is a possible concern for long term space travel. The CHIME investigation may help identify potential causes of immune system dysfunction and lead to ways of prevention, or to at least counter act it. This of course will help space travelers, but may also be useful to those with a compromised immune system here on Earth.

All crew members of the space station will remain increasingly busy between maintenance and upgrading the station inside and out, along with daily activities to keep themselves healthy and then their full slate of scientific research, which is the stations primary purpose after all. One of the biggest science experiments that will remain a focus for this mission is a series of Tissue Chips in Space studies. Tissue chips are small models of human organs containing multiple cell types and behave much as the same as they do in the body, making it possible to identify safe and effective therapeutics, drugs, and vaccines more quickly than the standard process on Earth. Microgravity helps the onset and progression of aging and diseases to occur more quickly.

“We know that cells communicate with each other and that this communication is critical for proper functioning,” says Liz Warren, senior program director at the ISS U.S. National laboratory. “We don’t fully understand why, but in microgravity, cell-to-cell communication works differently than it does in a cell culture flask on Earth. Cells also aggregate or gather together differently in microgravity. These features allow cells to behave more like they do when inside the body. Thus, microgravity appears to provide a unique opportunity for tissue engineering.”

Earth day was also a most fitting day for the launch to originally take place. A weather delay caused the twenty-four hour slip, but Crew-2 will continue the CEO (Crew Earth Observations) project. So far crew members have taken more than 1.5 million images of Earth, to contribute to scientific research such as studies on artificial lighting at night, algae blooms, and the breakdown of Antarctic ice shelves. When the crew of Crew-2 returns to Earth in the fall they will have severely upped that image tally, along with the total number of hours spent of scientific research done in orbit. With Crew-3 and Crew-4 members already chosen and in training, the orbiting lab will continue to rack up impressive scientific results.