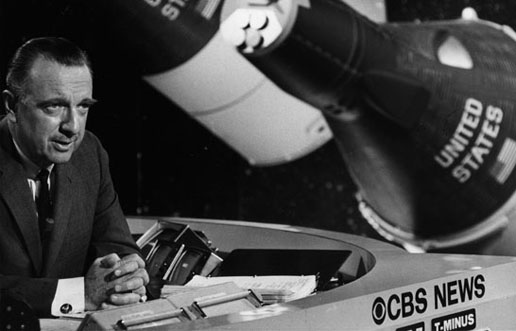 ORLANDO, FLORIDA – Before we begin, I would like to point out the fact that I am a space nerd. I have been since my first visit to Kennedy Space Center in the second grade. As such, this article is about me, my colleagues, and everyone else who cares about spaceflight and accurate reporting.

Space reporting is a genre as old as the space program. It has deep historical roots in the big three news agencies of the time, CBS, NBC, and ABC. Perhaps the best known space correspondent of all time was none other than Walter Cronkite, with CBS. Mr. Cronkite’s fascination and love of all things space was evident in every report, every interview, every special assignment. Perhaps the most telling moment of this phenomena was the July 1969 Moon landing by Apollo 11. Cronkite’s jubilation and glee are written all over his face. While this is not necessarily a great way for an impartial reporter to react to the news, the point is he cared. He cared about what was happening and he was part of those historical moments.

Today’s spaceflight environment is similar to the 1960’s in many respects. Historical flights are still happening, just not on the “landing on the Moon” scale. The players are different, but the stakes are very much the same. America is currently witness to a space race: the race to see who can be the first commercial company to deliver astronauts to the ISS and return them safely. The players are Boeing and SpaceX, and lives will be on the line in the coming year. Yet, many space reporters act as if launching things is old-hat, commonplace, and barely worthy of reporting. When something does go wrong, such as Boeing’s failure to put Starliner in a proper orbit, the reporting becomes sloppy as journalists push to be the first to release the story.

So, why are space nerds raging? Because spaceflight coverage by some major news organizations is lackluster, lacks depth, is not researched, and is wrong in many important aspects. This is not meant to vilify any news organisation, but to point out the fact that if you want accurate space news, you might want to have a space nerd reporting on it.

These are just a couple of examples of shoddy reporting coming out of the news. The point here is that even with a joke article about dragons flying next to the launch of a Dragon, have the basic facts right. In the ABC report above, the reporter, David Kerley, gave a semi-accurate account of events leading to the failure of Starliner to reach the ISS. From a layperson’s perspective, it sounds legit. But those who know realize that by blaming the failure on the Centaur upper stage, he was placing blame on ULA, not on Boeing. This may seem like a small error, but from the perspective of those businesses, it means possible loss of faith in their products and, most importantly, a loss of money in the end.

In short, if you want the real skinny on what’s happening in spaceflight, trust a space nerd. Here at Next Horizons Spaceflight, we are space nerds. We live and breathe this stuff every day. We have a love of all things space and strive to report the facts as clearly as possible. This is not to say that we are the only ones out there giving great coverage. A simple Google search of “spaceflight news” will give you many excellent resources. If you want a quick and concise article, you can find that. If you feel the desire to get into the weeds and get technical specs, you can find that as well. However, remember to take every article with a grain of salt. Don’t just blindly trust the articles that pop up on your news feed, find concrete information. There is bad reporting in the marketplace and as consumers we have to be smarter than the organisations which put out hot garbage and call it news.

Here is a list of reputable and accurate spaceflight news websites, it is not exhaustive: