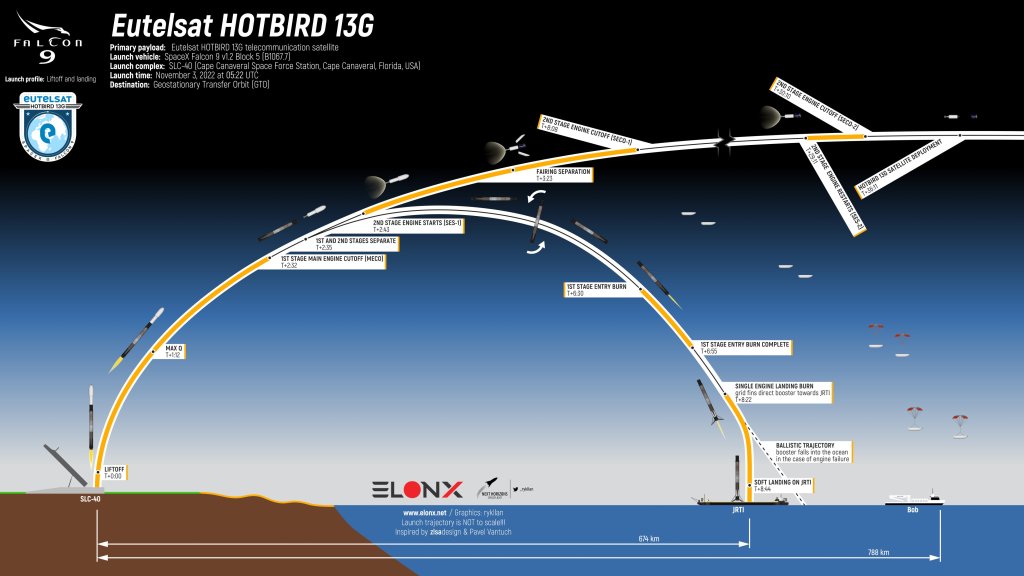 Just one day after their launch of a Falcon heavy rocket, SpaceX has sent up another Falcon 9 rocket to mark the fifty-first mission of the year. This one carrying Eutelsat’s Hotbird 13G satellite. Lifting off from SLC-40 at 1:22 am E.T. the rocket’s first stage returned to Earth a little under nine minutes later and landed on the drone ship Just Read the Instructions due East of the launch site in the Atlantic Ocean.

The Airbus Defense and Space built satellite, Hotbird 13G will join its twin satellite, Hotbird 13F which launched last month aboard another Falcon 9 rocket. These two spacecrafts will replace three existing Hotbird satellites taking up residence in geostationary orbit, about 22,300 miles above our Earth. Operated by the France based telecom company Eutelsat, the Hotbird family is one of the largest broadcasting systems in Europe, bringing over one thousand television channels to more than 160 million TVs across Europe, North Africa, and the Middle East.

Founded in 1977 Eutelsat launched its first satellite in 1983 with the Eutelsat I-F1 using an Ariane 1 rocket. Today’s mission was the second in a series of three missions contracted using SpaceX and were originally slated to fly on Ariane 5 and Ariane 6. When Ariane 6’s maiden voyage being delayed until the fourth quarter of 2023 Eutelsat was forced to find other means of getting their payloads to orbit. Hotbird 13G and its twin 13F have a mass of 4,500 kg with 80-Ku band transponders and also houses an L-band for the European GNSS Agency as EGNOS GEO-4 which will improve global positioning systems for the global navigation satellite system.

Falcon 9 B1067 which previously flew the CRS-22, Crew-3, Turksat 5B, Crew-4, CRS-25, and one Starlink mission has now made its seventh trip up and back for SpaceX as it successfully landed once again offshore. Eutelsat still has one more launch with SpaceX to go before the years end, the Eutelsat-10B will go to GTO (Geostationary Transfer Orbit) on Falcon 9 B1049’s final flight. SpaceX also has several more launches planned before the years end, starting with next week’s launch of the Galaxy 31 & 32 satellites on Falcon 9 B1051’s final flight. There will also be the CRS26 mission in mid-November to resupply the International Space Station. A lunar lander will also begin its mission along with several Starlinks planned for launch before the years end.