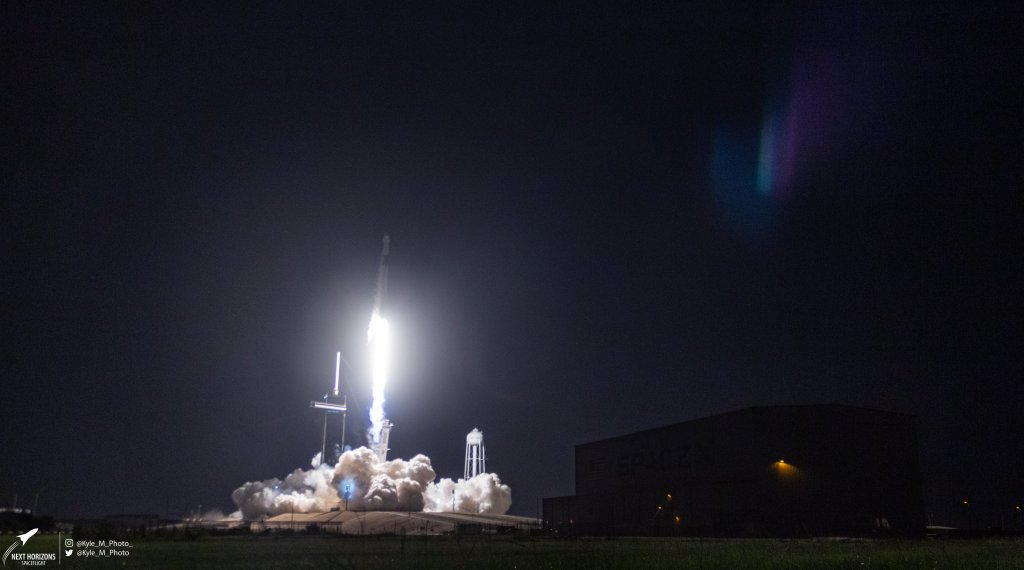 August 29th at 3:14 AM Est atop a Falcon 9 rocket from LC-39A from Kennedy Space Center

After nine long weeks with out a single launch from Florida’s space coast spectators lined the shores even with bad weather looming in the distance, to see SpaceX send up another rocket to resupply the ISS (International Space Station). Everyone went home disappointed, some even a little wet from the thunder storms that rolled through the area causing the launch to scrub. With the twenty-four hour delay the launch time moved up from 3:37 AM Est to 3:14 AM Est and weather conditions looked slightly more favorable this evening as well with the forecast calling for a 60% GO for launch.

With over four thousand eight hundred pounds of cargo, supplies, and research experiments loaded in its hold, the SpaceX cargo capsule is a critical piece of hardware to the American Space Program. The capsule itself, C-2082 is making its second flight for the agency as SpaceX recently upgraded their Dragon Capsules to their second variant. It should come as no surprise that the Falcon 9 block 5 rocket flown early this morning was also flown previously. Four times previously at that, with its first mission back in November of 2020 when it flew four astronauts on the first operational mission to the ISS from American Soil on Crew-1. From there it wasn’t until April of 2021 when booster 1061 flew again, this time with four more astronauts for the Crew-1 mission.

That when the booster was no longer certified to fly astronauts through NASA and it went on to carry the SXM-8 satellite for Sirius XM to orbit in June of 2021. Now for it’s fourth flight flight it is once again under NASA contract for the CRS-23 mission. This comes as the third flight for SpaceX to the International Space Station launching with the CRS 2 contract, and the twenty-sixth overall time the company has visited the space station with a variant of the dragon capsule (This includes the Crew Dragon capsules). This morning’s launch marked the twenty-first SpaceX launch this year, the one-hundred-twenty-fourth launch of a Falcon 9 rocket, and when booster 1061 touched back down on the drone ship roughly eight and a half minutes after launch it became the ninetieth landing of a first stage rocket booster for the company.

As for where that first stage landed, that is another interesting aspect to this launch. This was the first mission for the newest SpaceX drone ship ASOG or “A Shortfall of Gravitas” which is the first fully automated drone ship from the company. ASOG has the ability to bring itself to and from the landing zone for launches with out having to be towed behind a tug boat like it’s two predecessors the OCISLY (Of Course I Still Love You) and JRTI (Just Read The Instructions). A few months ago we saw via twitter that the vessel did not need any assistance out in the open Ocean, but for this mission it was towed out by one of the regular tug boats SpaceX contracts for their support vessels. It is unclear yet at this point where the drone ship will make its own way back or be pulled along into Port Canaveral.

Rain and Clouds surrounded Cape Canaveral as well as the entire state of Florida for several days now as hurricane IDA slowly worked her way up the Gulf Of Mexico, and is expected to make landfall over Louisiana right around the time CRS-23 was set to launch. Weather bands from that storm is what caused the delay yesterday and raised fear this evening as to if this mission was to get off the ground in the wee hours of this morning. Forecasted through the night showed clouds over the Cape, but only a twenty percent chance of rain during the scheduled departed time. As time grew nearer to launch the clouds dissipated and the stars shone bright upon onlookers who lined the beaches and causeways at this early hour. At T-minus zero the ignition started up and fire appeared out of the nine Merlin 1D engines pushing the Falcon 9 slowly off the launch pad.

It gained speed and momentum as it headed towards space to release the second stage in it’s push to the International Space Station. Cargo Dragon will spend the next two days chasin7g the ISS before finally docking where the astronauts can then receive the payload, all four thousand eight hundred pounds of it. From there the capsule will stay docked at the space station for about thirty days before it will return home to Earth, likely splashing down in the Atlantic Ocean. On board when it returns are some of those research experiments and their conclusions. The more time sensitive ones being flown directly back to Kennedy Space Center via helicopter as they are offloaded as soon as Dragon is secured on the deck of one of SpaceX’s recovery vessels.