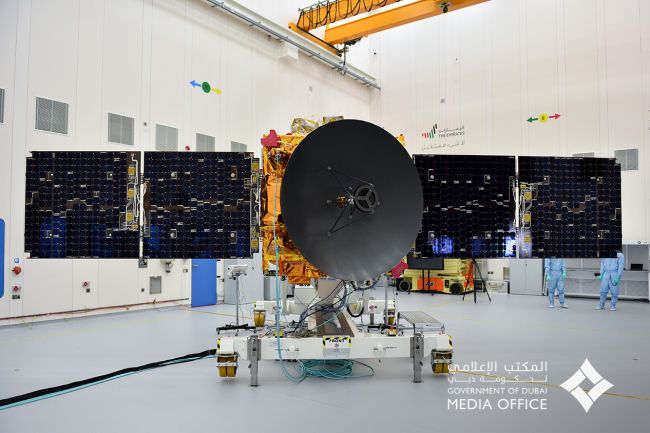 As previously reported here on Next Horizons Space Flight, the United Arab Emirates are planning on partaking in the 2020 Mars launch availability, which runs from July to September. NASA and CSNA are both also planning on taking advantage of this availability with their own landers.

The Emirates Mars Mission or Mars Hope mission will be the UAE’s first foray into the solar system, with their previous four launches being Earth observation satellites and a CubeSat. This mission will send an orbiter around the Red Planet to continue research into Martian weather. Particularly, Hope is set to delve into the mystery of why Mars is losing hydrogen and oxygen into space and why Mars has had such drastic climate changes. This will be accomplished by studying daily and seasonal weather cycles, observing weather events in the lower atmosphere (like dust storms), and observing differences in weather in different regions.

Hope is a joint venture between UAE and three American Universities: the University of Colorado, University of California, Berkeley, and Arizona State University. UAE is building the satellite bus and has procured launch vehicle services from JAXA, the Japanese space agency, while the universities are building the instrumentation packages.

The instruments on board Hope are various forms of weather detection instruments, such as would be used to observe the Earth:

The launch is set for July 2020, and if it does not make that window the backup will be in 2022. Hope is part of an overarching program from UAE, which consists of three very human goals. H.H Sheikh Mohammed bin Rashid Al Maktoum mentioned these in a statement upon the announcement of this program.

“The first message is for the world: that Arab civilisation once played a great role in contributing to human knowledge, and will play that role again; the second message is to our Arab brethren: that nothing is impossible, and that we can compete with the greatest of nations in the race for knowledge and the third message is for those who strive to reach the highest of peaks: set no limits to your ambitions, and you can reach even to space.”

The United Arab Emirates see this mission as an investment in their people and in science. As such they also consider this mission part of the overarching world-wide plan to colonize the Red Planet by 2117.

We at Next Horizons Spaceflight are incredibly excited about this year’s Mars window and the missions which will be heading into the solar system. Stay tuned for any updates or news!